Surefire XC1 and how to spot the Fake

by Josh Ray
Comments are off

As I’m sure a lot of you know, Surefire recently released their XC1 weapon light. What you might NOT be aware of it that there is also at least one Chinese knock off or “clone” as I will refer to them going forward.

With the real thing having an MSRP of $300 and a retail price around $270, you might find a “deal” that ends up being a clone, so I’m here to show you how be sure you’re not getting taken.

I have seen clones for sale on Amazon being sold as genuine Surefire at over $200, when they should cost $50-60.

First of all, if you stick to buying directly from an authorized Surefire dealer, you’re pretty safe. However, with the ever growing popularity of online retailers like Amazon, it’s harder and harder to stick to said authorized dealers.

OK, now to the brass tacks.

I’ll first go over some cosmetic features that differ, so you can hopefully avoid buying the clone to being with.

Most notably, the clone’s “XC1” marking is solid.

(Surefire on left. Note the color difference in the markings and the switch recess.)

Surefire’s momentary switch looks, at first glance, like a “rocker” like you’d commonly find on a weapon light. However, there are, in fact two separate micro switches (one on each side) with a button pinned to the switch posts.
The clone’s switches (also appear to be a rocker, but aren’t) are longer, a different shape, and have no pins.  They also operate differently but more on that later.

(Surefire on left. Note the differences in switch design. )

(Surefire on left. Note the pins holding the buttons on to the switches. Also the length and shape of the buttons.)

Surefire’s constant on switch is located further up on the light (slightly rear of center of the body) and has fairly large oval shapes recesses on either side of the body to better facilitate switch operation.  The switch is a cross block switch, similar to a cross block safety found on many shotguns and rifles.

The clone’s constant on switch is also a cross block type and is in roughly the same place as Surefire’s, but with a significantly smaller relief around the switch. It, once again, operates differently and, again, more of that later.

The Surefire has a serial number and QR code on the top of the body to the rear of the locking bar.

The clone has no serial number or QR code at all. 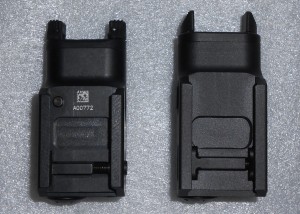 (Surefire on left.  Note the serial number, and difference in length.)

If you’ve somehow missed all of these signs and ended up with a light that you’re not sure about here are some things to look for once you have it in your hot little hands.

The “business end” has some more good signs, but they may be difficult to tell from photos.

Surefire’s reflector has something of a faceted surface. The lens over the bulb also appears to have an anti-reflective coating (or perhaps just better “glass”) as it is

The clone’s reflector is smooth and the lens in quite visible.

(Surefire on left. Note the “faceted” reflector.  An astute observer will also notice the depth on the bulb varies between the two.)

The Surefire is slightly smaller and lighter than the clone. The clone’s slightly larger dimisions (particularly the extra length) causes some compatibility issues.

Unfortunately,  I do not have a scale that will accurately weigh these so I cannot include that data.

The Surefire was designed with the Glock 19 in mind but also the capability to fit other pistols with a picatinny type rail, and it does that.

I’ve mounted mine to several full and mid-size guns and none have been an issue.

I will note that I know that it will not it an M&P 9 compact or a rail framed Springfield micro-compact 1911, but those guns (and most of similar size) were never

intended to use standard lights.

The clone on the other hand has some big compatibility issues, and this is where the extra length that I mentioned before becomes an issue.

(Clone on Glock 19. Note the alignment difference from M&P.)

Another problem with the clone that the Surefire does suffer, is the locking bar.  On the clone, you must entirely remove the locking bar to install it on a rail (pistol or otherwise).

Let there be light.  I should note that both units were tested with brand new Energizer “AAA” batteries from the same package/lot.

The Surefire is rated at 200 lumens according to Surefire, and I have no reason to doubt that claim.

The clone is also listed at 200 lumens according to the Hong Kong retailer this unit came from.  However, I certainly question that.

While I do not have a proper light meter to measure the output, I can say that testing side-by-side, the clone is simply NOT as bright as the Surefire.

Even if I’m wrong, and the clone is close to 200 lumens, the Surefire DEFINITELY has a better “flood” and covers a wider area.

(Surefire in a closet)

As I mentioned earlier, there is some real differences in the way the switches work between the two. The Surefire’s momentary switch works by pressing down on either

switch to activate the light, releasing will deactivate.

The constant on switch can only be activated by pressing it from the right side. Press from the left to deactivate.  I initially didn’t like that, but keep reading and you’ll

The clone’s momentary switch has to be pushed in (forward) to activate, release to deactivate.

The constant on switch, (unlike the SF) can be activated from either side of the light, and pushed back to center to deactivate.  At first I thought this was a good thing as it

makes that feature more useful to left handed shooters. However, I found that when trying to deactivate it, it’s all too easy to accidentally “over press” the switch turning it

off (very briefly) and then back on.  Not a good thing if you want/need the light off, especially under stress.

On a side note, I find the constant on switch to be in a bad place. You have to shift/break your grip on the pistol in order to operate it.

This is a minor issue for me as I rarely use a weapon light in constant on mode, but I though it worth mentioning.

Two final give always that you can pretty much only find out in person.
Surefire’s anodizing is significantly harder than that of the clone.  The Surefire easily shrugged off much harder attacks with a steel blade that those that left a void in the

clone’s anodizing. I’m not advocating that you take a blade to your light, in fact don’t do that. It just happened to be the easiest method I could think of to test the finish.

The battery cap on the Surefire has a deep recess with a plastic/rubber “washer” inside.

The clone’s battery cap has a shallow recess and no “washer”.

So there’s pretty much everything I can tell you about how to spot a clone.  Do your due diligence, and buyer beware.

That said, I know some of you might be tempted to purposely  buy a clone to use on airsoft guns for FOF training or general farting around. So let me add one more thing.

The clones do not fit most airsoft Glock replicas (the frames are too wide), M&Ps etc. They only seem to fit full sized 1911 and M92 variants with railed frames.

About the Author
Josh (a.k.a."Tank") has been training with QSI as a student and instructor since 2003. He's a veteran of the US Navy and holds certifications as an NRA Pistol Instructor and Personal Protection in the Home Instructor.
Social Share