Malfunction Drills got a little too exciting

I’ve been setting up complex malfunction drills this way for over 20 years and nothing like this has happened before. I’m sharing our experience so others can benefit from it.

Last weekend we were on the range doing some instructor development training, part of which was clearing malfunctions. We had just done simple malfunctions and were moving on to complex malfunctions (what are commonly called “double feeds”.)

Prior to this incident, here is how we set them up:

We now have a weapon with a complex malfunction that the student will have to clear. When the slide is forward, we see something like this: 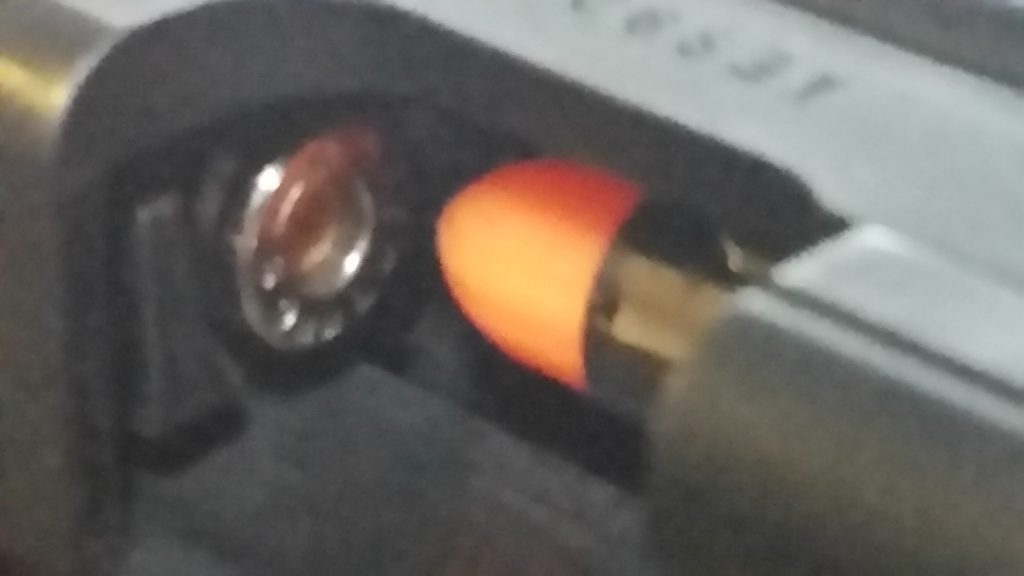 Based on the number of students and classes we’ve taught I can conservatively say we’ve done this a couple of thousand times without incident. We learned this technique from a very respected and well-known trainer, and have seen it done by many others in classes we’ve attended.

This time, however, when the instructor got to Step 7, the gun discharged when he released the slide.

His fingers were nowhere near the trigger, and the gun was out of battery. The round went downrange and impacted the berm.

We immediately called a cease-fire and had the line re-holster. The instructor handed the gun off to another instructor and then checked himself out for injuries, then another instructor checked him to be sure. Fortunately, all he had was some tattooing on his left arm, likely from unburnt powder from the muzzle (he was wearing short sleeves).

If he had not turned the gun sideways with the ejection port facing down, that could have been a lot worse. This is why it is our procedure to always do this while loading and unloading. The arm position has the added benefit of protecting debris from hitting you in the face.   We do this because of the potential for accidents while unloading or loading – you don’t want the gas and debris from the ejection port to blow up in your face.

Orientation of the instructor’s arms when the round discharged.  He was turned “into the gun” and the muzzle was pointed downrange.

For safety purposes we are demonstrating this with an Airsoft gun in this photo.

Upon further inspection, the gun had clearly fired out of battery. The magazine floorplate was blown off the magazine body was split. 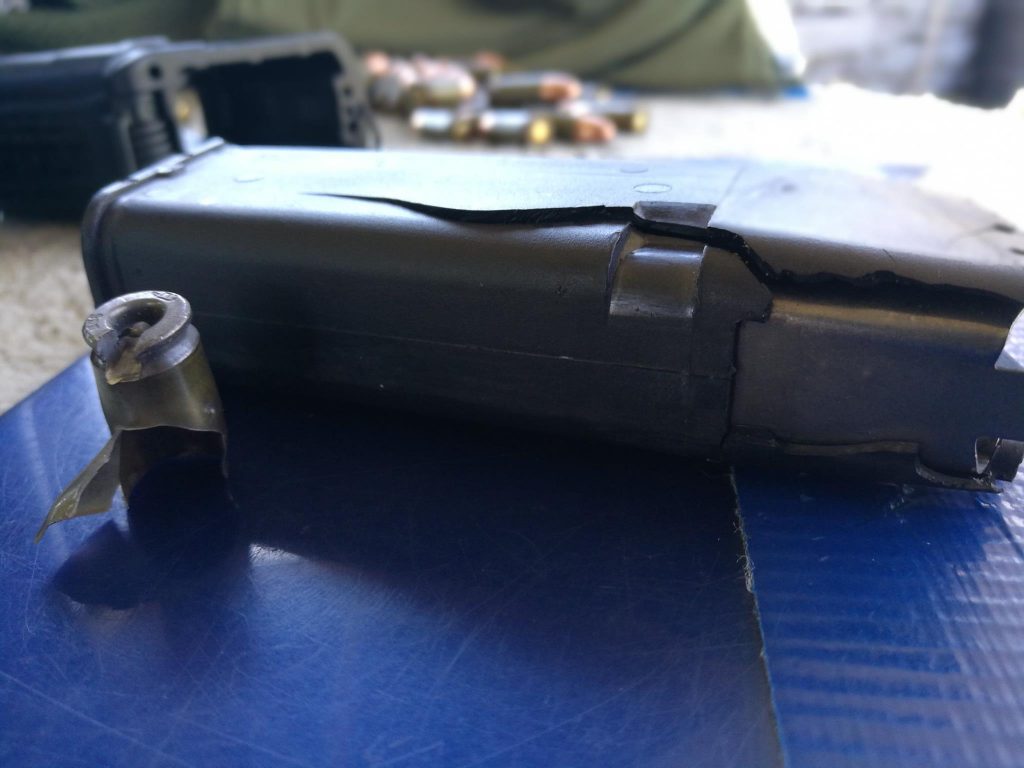 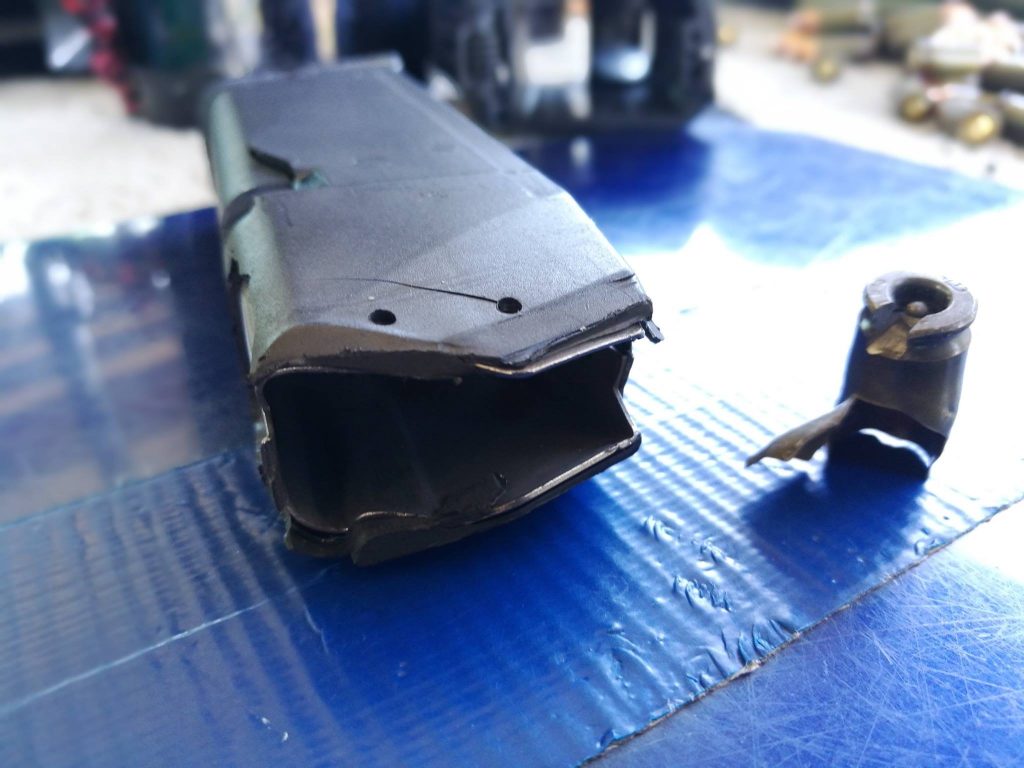 We found the shell on the ground, split open, further indicating an out-of-battery detonation.

One of our other instructors, who is a Glock armorer, tore down the gun. Most of the lower parts were damaged and will need to be replaced. He wasn’t sure about the frame but thought it should probably be replaced as well. The slide had a lot of tiny debris inside it, including in the breechblock and under the extractor. The barrel looked fine, but of the slide’s internal components were also damaged. It will cost about $200 to fix the gun, assuming the frame is not damaged.

We’re not sure exactly what happened.  The gun was in good mechanical condition and had no modifications other than an aftermarket slide.  We initially suspected that a round had bounced into the ejector, or something like this incident – however, upon closer examination, that does not appear to be the case.  The round went downrange via the barrel, which indicates it was in the chamber when it discharged.  We also could not find any deformation or damage to the gun’s ejector.

Re-creating the conditions with dummy rounds, we discovered this possibility: 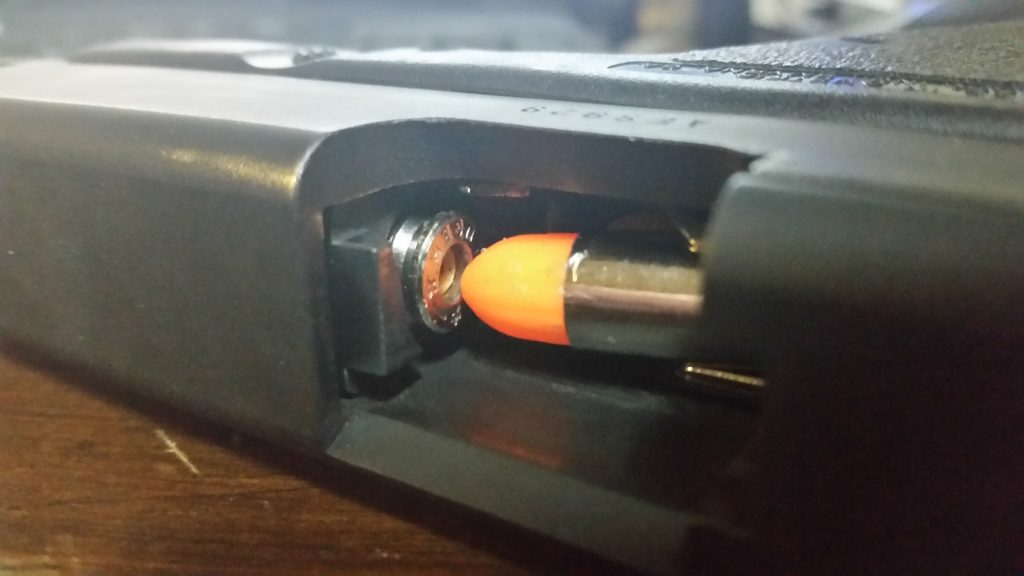 After being dropped into the chamber, the round slid back and seated its primer against the nose of the top round in the magazine. When the slide was released, the force detonated the round.

Regardless of the cause, we’ve decided to change how we do this drill in the future.  Our solution is pretty simple; we’re going to set up using two dummy rounds at the top of the magazine. Once we got everything back under control at the range we tested this method and it worked great.

The lesson reinforced here is clear: No matter who you are, and no matter what you are doing, you must always handle guns carefully and responsibly.

We also recommend wearing eye protection whenever handling a gun – even if you aren’t shooting it.

We’re glad everyone is OK, and hope that sharing this experience can prevent future incidents.